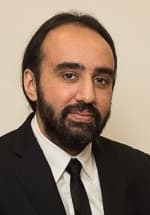 Rip Gajjar has been with The Firm since 2006. Rip assists clients with various business transactions and complex litigation matters. He offers individualized attention to businesses and entrepreneurs seeking growth opportunities and dispute resolution.

He has also represented businesses with all aspects of commercial transactions, from entity formation, drafting partnership agreements and employment contracts, and filing and defending trademark applications.

Rip has also been involved in helping companies obtain the proper licenses and authorizations to expand into new areas of business and enter new markets.

Rip began his legal career as a paralegal and subsequently attended St. John’s School of Law where he was a member of the New York International Law Review. He interned at the Department of Enforcement at the Financial Industry Regulatory Authority (FINRA) and was involved in bringing regulatory actions against firms such as Lehman Brothers, UBS and E-Trade.

Rip also interned at the Litigation Bureau of the Office of the Attorney General of New York where he represented several State agencies such as the Department of Banking and the Board of Regents, and defended actions filed against State judges.

Rip has in-depth knowledge of federal and local securities laws inclusive of those which facilitate raising capital for small and mid-cap companies without the cost of a public offering.